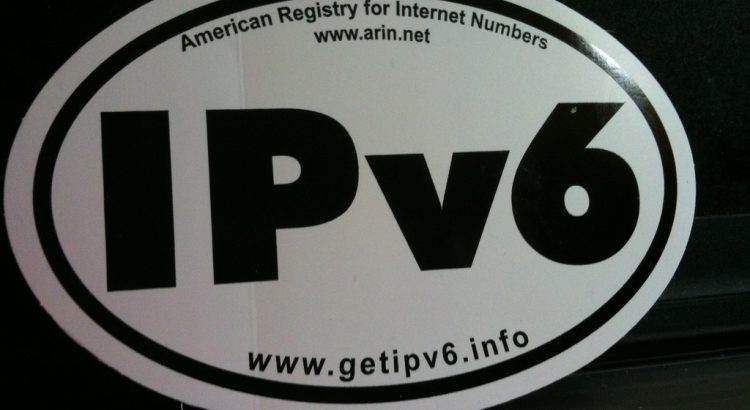 NOTE: This article was replaced on 2019-03-12 by a github repository where I now use Vagrant instead of a Raspberry Pi, because I was having some power issues with my Raspberry Pi. Also, using this method means I can easily use an Ansible Playbook. The following config will still work(!) however I prefer this Vagrant/Ansible workflow for this, so won’t update this blog post any further.

Following an off-hand remark from a colleague at work, I decided I wanted to set up a Raspberry Pi as a Hurricane Electric IPv6 6in4 tunnel router. Most of the advice around (in particular, this post about setting up IPv6 on the Raspberry Pi Forums) related to earlier version of Raspbian, so I thought I’d bring it up-to-date.

I installed the latest available version of Raspbian Stretch Lite (2018-11-13) and transferred it to a MicroSD card. I added the file ssh to the boot volume and unmounted it. I then fitted it into my Raspberry Pi, and booted it. While it was booting, I set a static IPv4 address on my router (192.168.1.252) for the Raspberry Pi, so I knew what IP address it would be on my network.

I logged into my Hurricane Electric (HE) account at tunnelbroker.net and created a new tunnel, specifying my public IP address, and selecting my closest HE endpoint. When the new tunnel was created, I went to the “Example Configurations” tab, and selected “Debian/Ubuntu” from the list of available OS options. I copied this configuration into my clipboard.

I SSH’d into the Pi, and gave it a basic config (changed the password, expanded the disk, turned off “predictable network names”, etc) and then rebooted it.

After this was done, I created a file in /etc/network/interfaces.d/he-ipv6 and pasted in the config from the HE website. I had to change the “local” line from the public IP I’d provided HE with, to the real IP address of this box. Note that any public IPs (that is, not 192.168.x.x addresses) in the config files and settings I’ve noted refer to documentation addressing (TEST-NET-2 and the IPv6 documentation address ranges)

Next, I created a file in /etc/network/interfaces.d/eth0 and put the following configuration in, using the first IPv6 address in the “routed /64” range listed on the HE site:

I accessed another host which had IPv6 access, and performed both a ping and an SSH attempt. Both worked. Fab. However, this now needs to be blocked, as we shouldn’t permit anything to be visible downstream from this gateway.

I’m using the Uncomplicated Firewall (ufw) which is a simple wrapper around IPTables. Let’s create our policy.

Most of the documentation I found suggested running radvd for IPv6 address allocation. This basically just allocates on a random basis, and, as far as I can make out, each renewal gives the host a new IPv6 address. To make that work, I performed apt-get update && apt-get install radvd -y and then created this file as /etc/radvd.conf. If all you want is a floating IP address with no static assignment – this will do it…

However, this doesn’t give me the ability to statically assign IPv6 addresses to hosts. I found that a different IPv6 allocation method will do static addressing, based on your MAC address called SLAAC (note there are some privacy issues with this, but I’m OK with them for now…) In this mode assuming the prefix as before – 2001:db8:123d:abc:: and a MAC address of de:ad:be:ef:01:23, your IPv6 address will be something like: 2001:db8:123d:abc:dead:beff:feef:0123and this will be repeatably so – because you’re unlikely to change your MAC address (hopefully!!).

This SLAAC allocation mode is available in DNSMasq, which I’ve consumed before (in a Pi-Hole). To use this, I installed DNSMasq with apt-get update && apt-get install dnsmasq -y and then configured it as follows:

I decided to move from using my router as a DHCP server, to using this same host, so expanded that config as follows, based on several posts, but mostly centred around the MAN page (I’m happy to have this DNSMasq config improved if you’ve got any suggestions ;) )

So, that’s what I’m doing now! Hope it helps you!

Late edit (2019-01-22): In issue 129 of the “Awesome Self Hosted Newsletter“, I found a post called “My New Years Resolution: Learn IPv6“… which uses a pfSense box and a Hurricane Electric tunnel too. Fab!

Header image is “www.GetIPv6.info decal” by “Phil Wolff” on Flickr and is released under a CC-BY-SA license. Used with thanks!